On November 22nd, the Awarding ceremony of Chinese Ambassador Scholarship were held at the Embassy of the People’s Republic of China in Tanzania. Deputy Minister of Education, Science and Technology of Tanzania, Hon. William Ole Nasha, Chinese Ambassador to Tanzania, H.E. Wang Ke, and Secretary-General of the Tanzania-China Friendship Association, Mr. Joseph Kahama attended the event. Mr. Wang Siping, the Cultural Counselor of the Chinese Embassy in Tanzania hosted the event, and some teachers and students and 40 award winners from Confucius Institute at the University of Dar es Salaam (CIUDSM) participated in it. 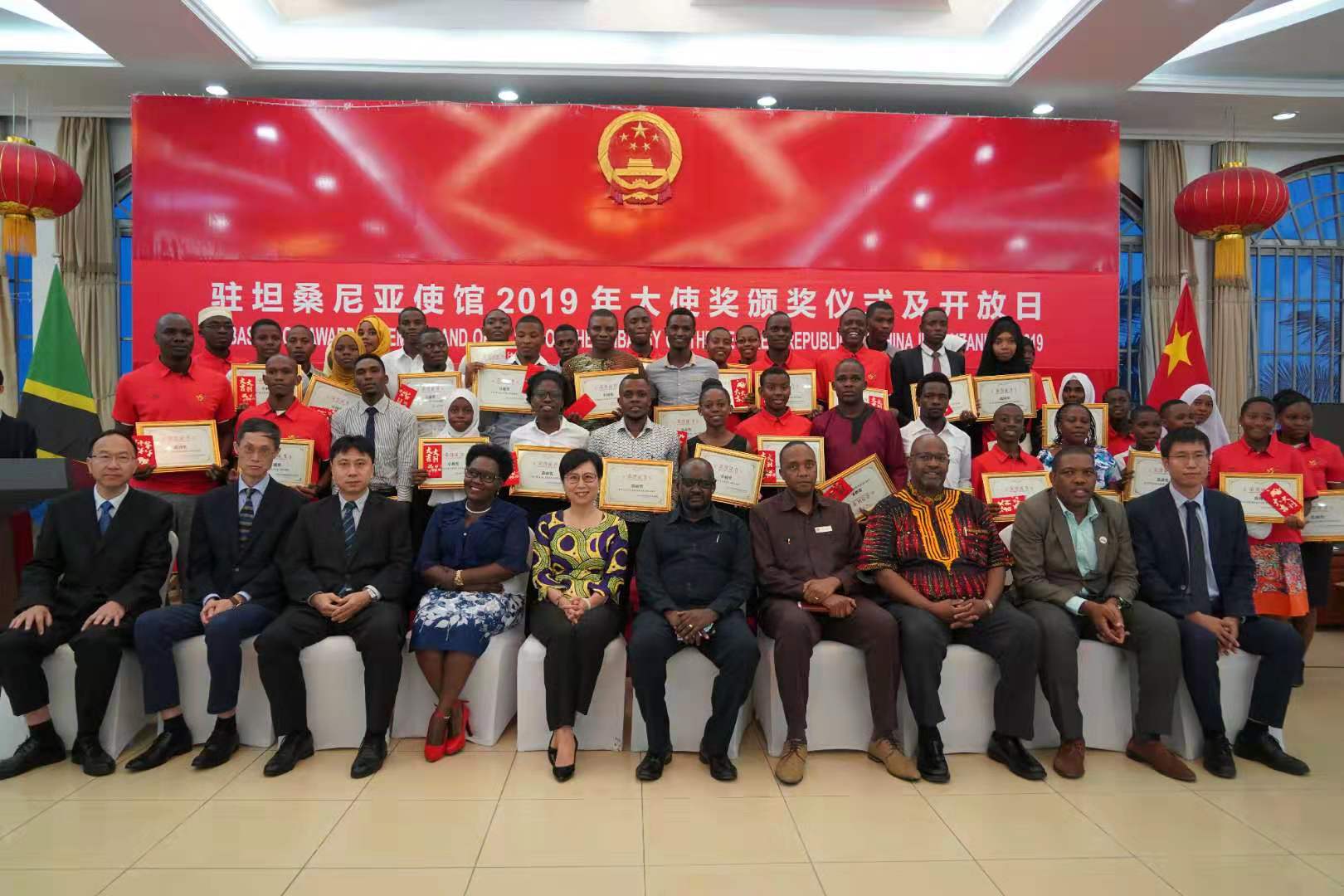 Ambassador H.E. Wang Ke delivered a speech. She expressed her appreciation for the hard work of more than 80 Chinese teachers in 14 Regions in Tanzania and her gratitude for the support from the universities and secondary schools in Tanzania. She praised the work of the Confucius institutes and classes in Tanzania, such as the Kiswahili training course held by CIUDSM and the Swahili edition of the children's book "Pipiru na Safari ya Gari Nyekundu" translated by Mr. Emmanuel Legonga from CIUDSM. She also pointed out that Tanzanian students learning Chinese and Chinese people learning Swahili will deepen the cultural communications between the two peoples. Finally, she encouraged the students to study hard and try to win the chance to study in China, with the knowledge they learned to serve Tanzania better in future, and to promote exchanges and cooperation between China and Tanzania.

Hon. William Ole Nasha expressed his gratitude to the Chinese teachers who helped students to learn Chinese broaden the students’ horizons and help them to improve the competitiveness for their career in future. He pointed out that Tanzania and China are like brothers, and the friendship are unbreakable. The two countries have maintained friendly cooperation and exchanges in various fields such as education, culture, health care, and agriculture. He expressed his gratitude to the Ambassador of the Chinese Embassy in Tanzania for the support to the education in Tanzania. He hopes that the award-winning students will continue to study hard and serve in all fields of society in the future. 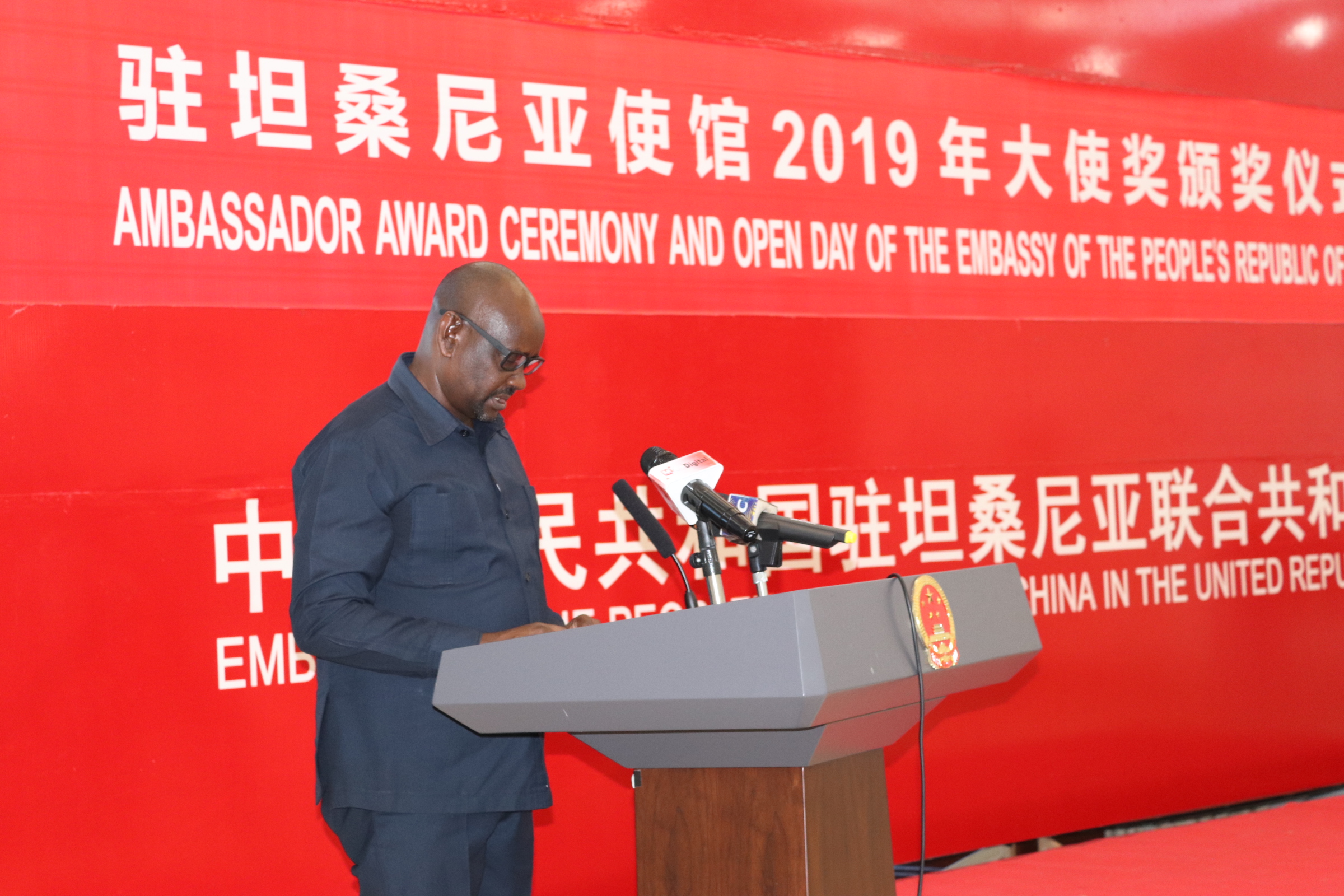 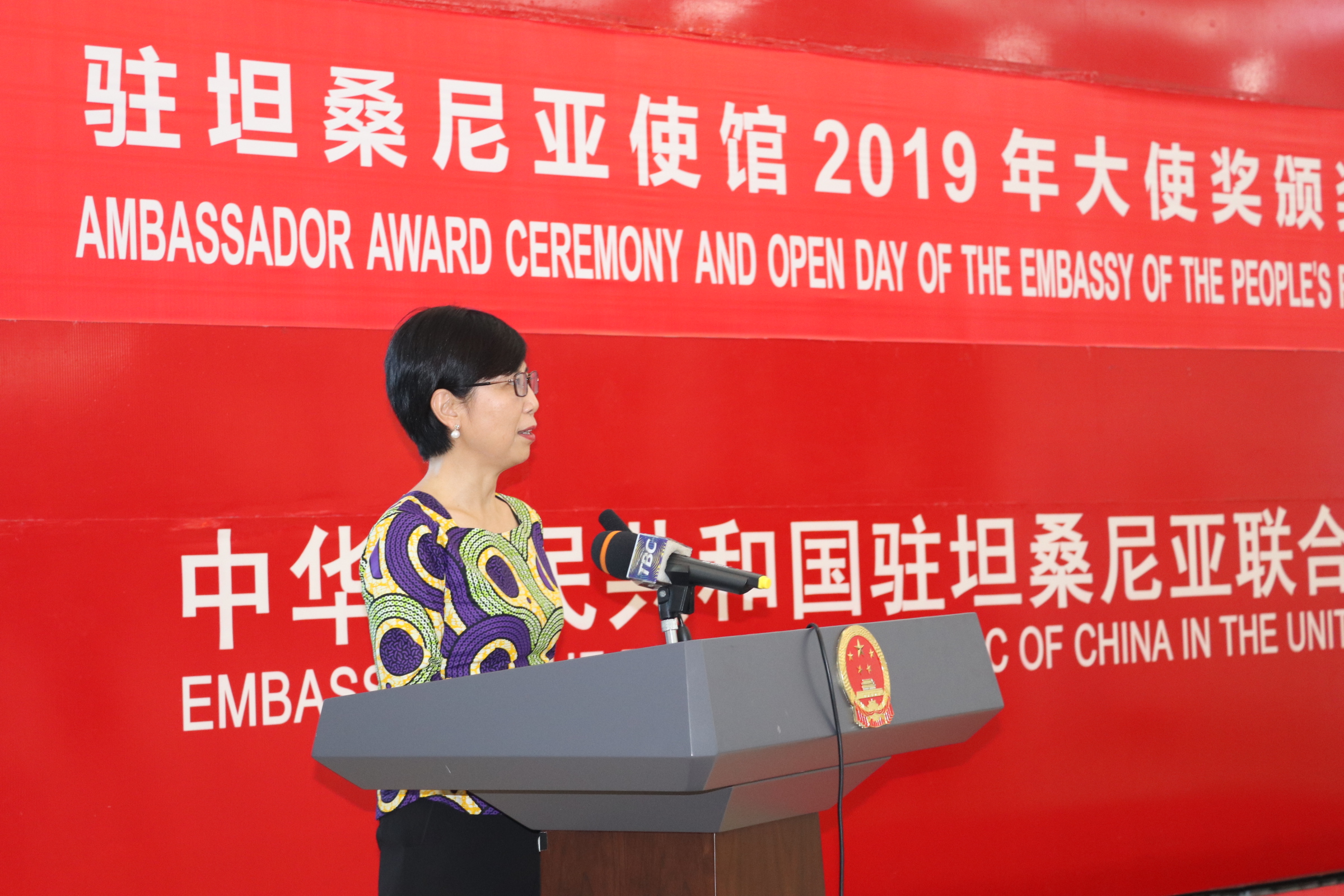 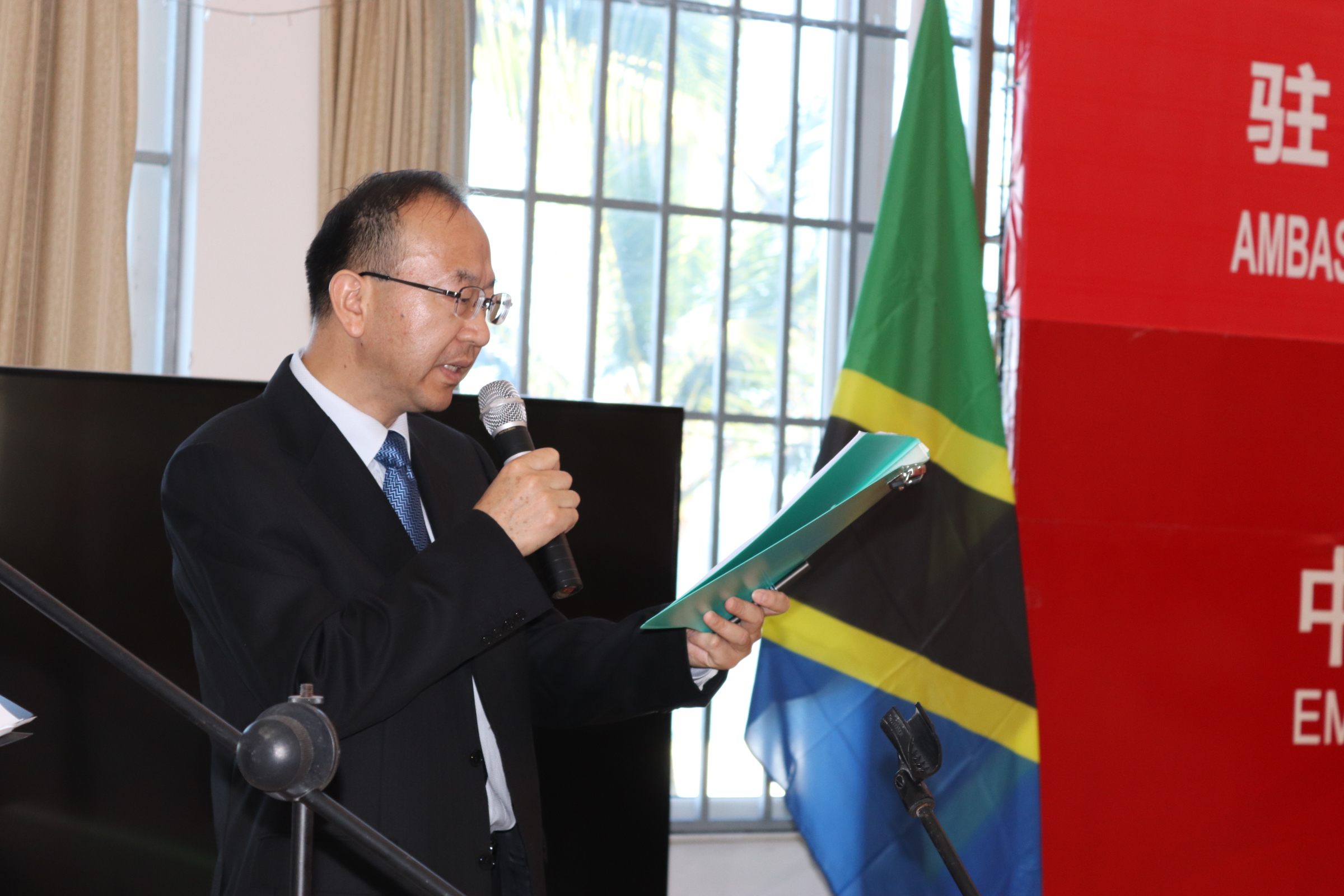 The student from CIUDSM , Ms. Gloria Mshana gave a speech as a representative of the award-winning students. She expressed her gratitude to the Chinese Embassy and CIUDSM with fluent Chinese. She said that Chinese is a bit difficult, but many Chinese teachers would like to help her patiently. This Chinese Ambassador Scholarship also strengthened her confidence in learning Chinese. 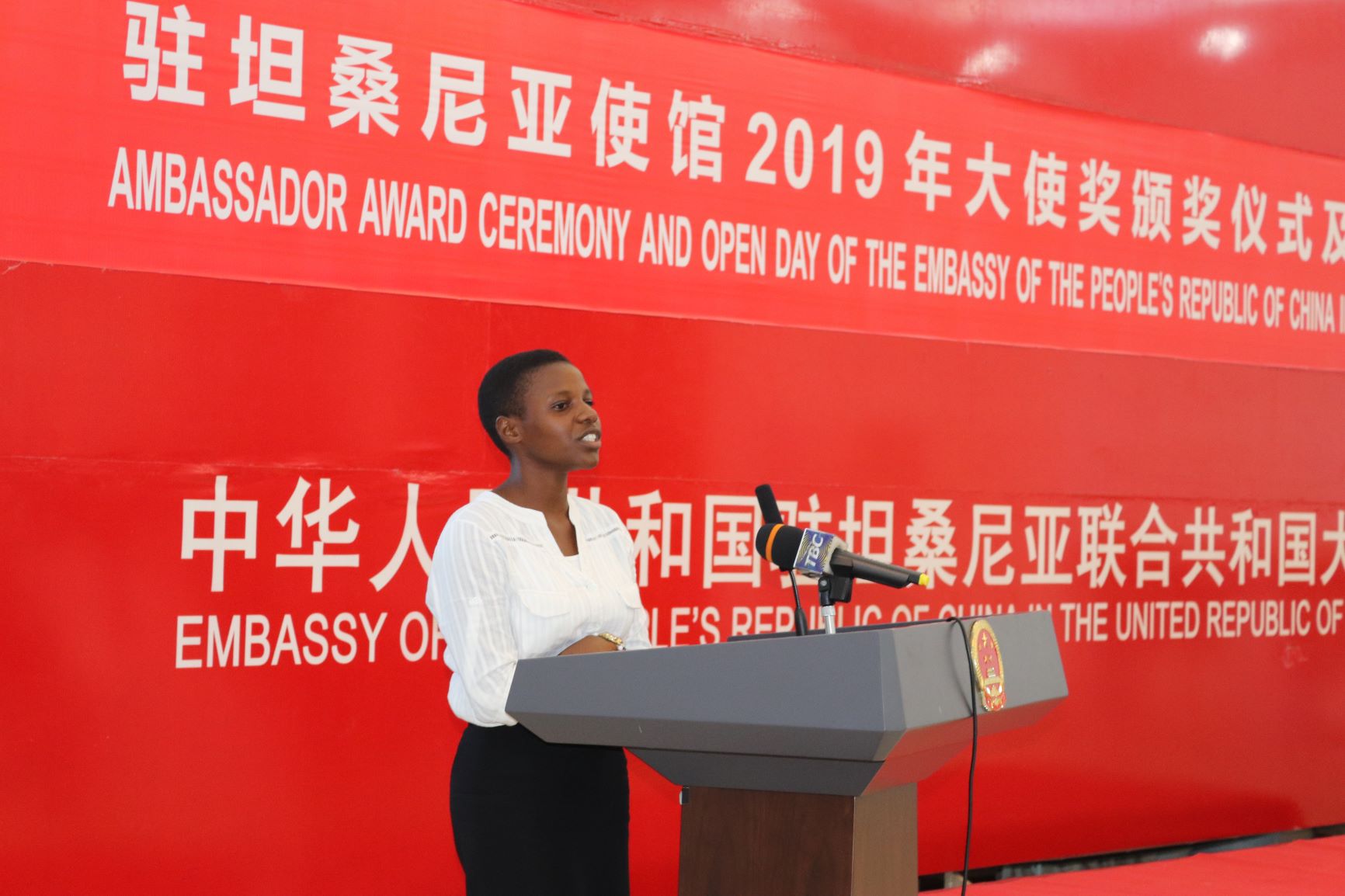 Ms. Mashana made a speech

Later, the guests presented honorary certificates and bonuses to the students who won the Chinese Ambassador Scholarship. In 2019, a total of 80 students won the "Chinese Ambassador Scholarship", includes 20 Excellence Awards and 60 Encouragement Awards.  Ten students from CIUDSM won the Excellence Awards and thirty Encouragement Awards. 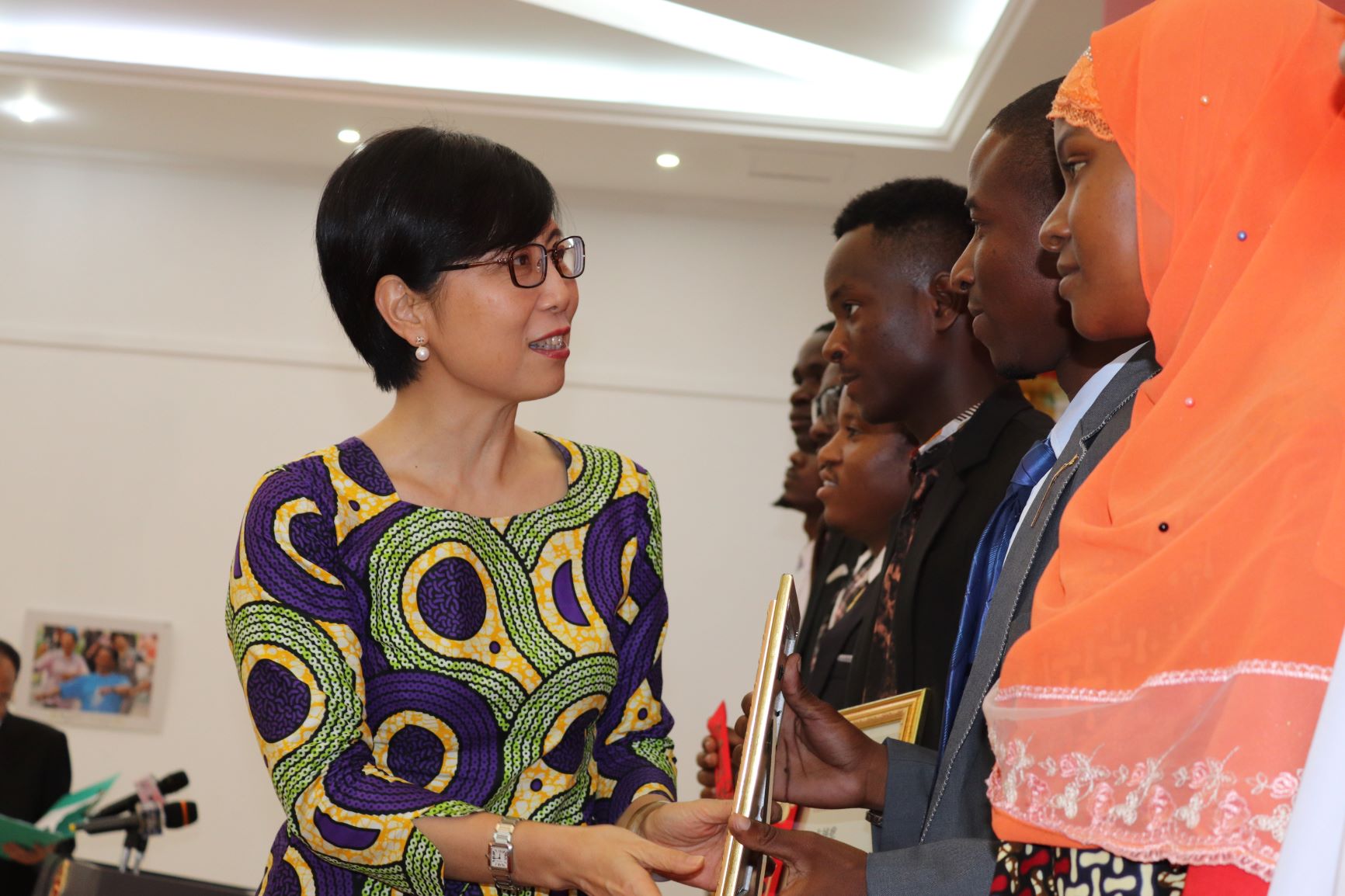 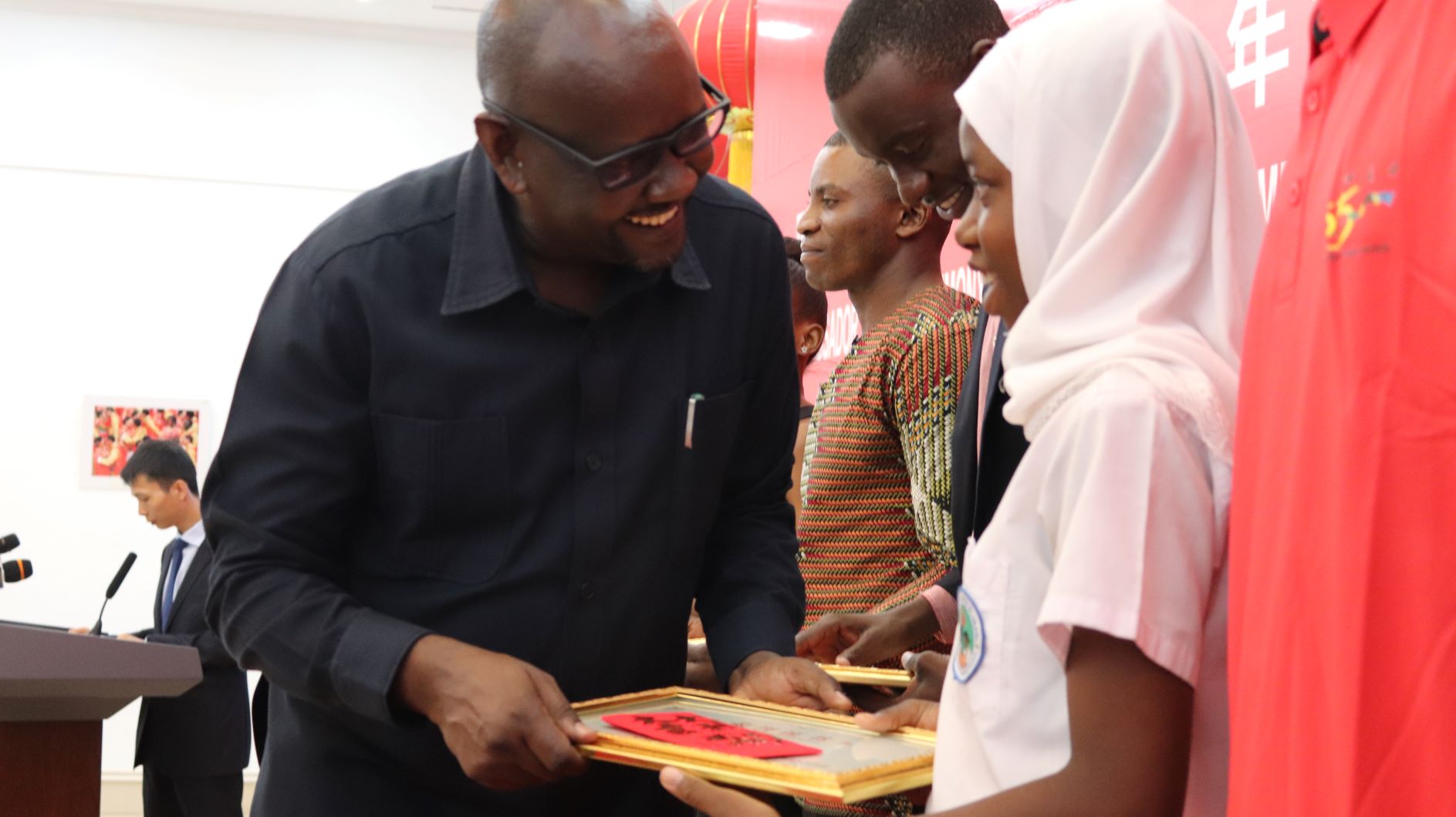 Guests presented awards to the students 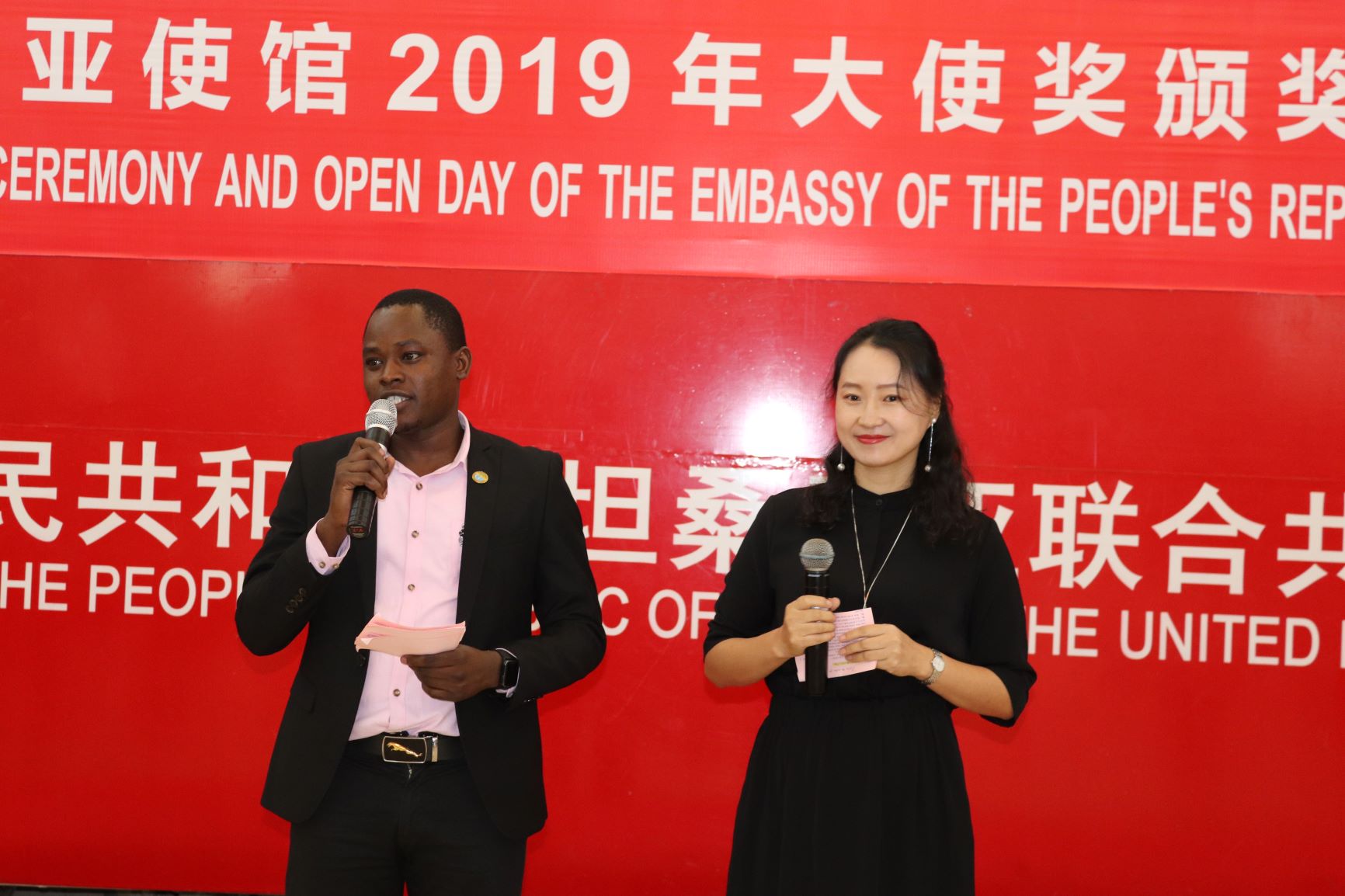 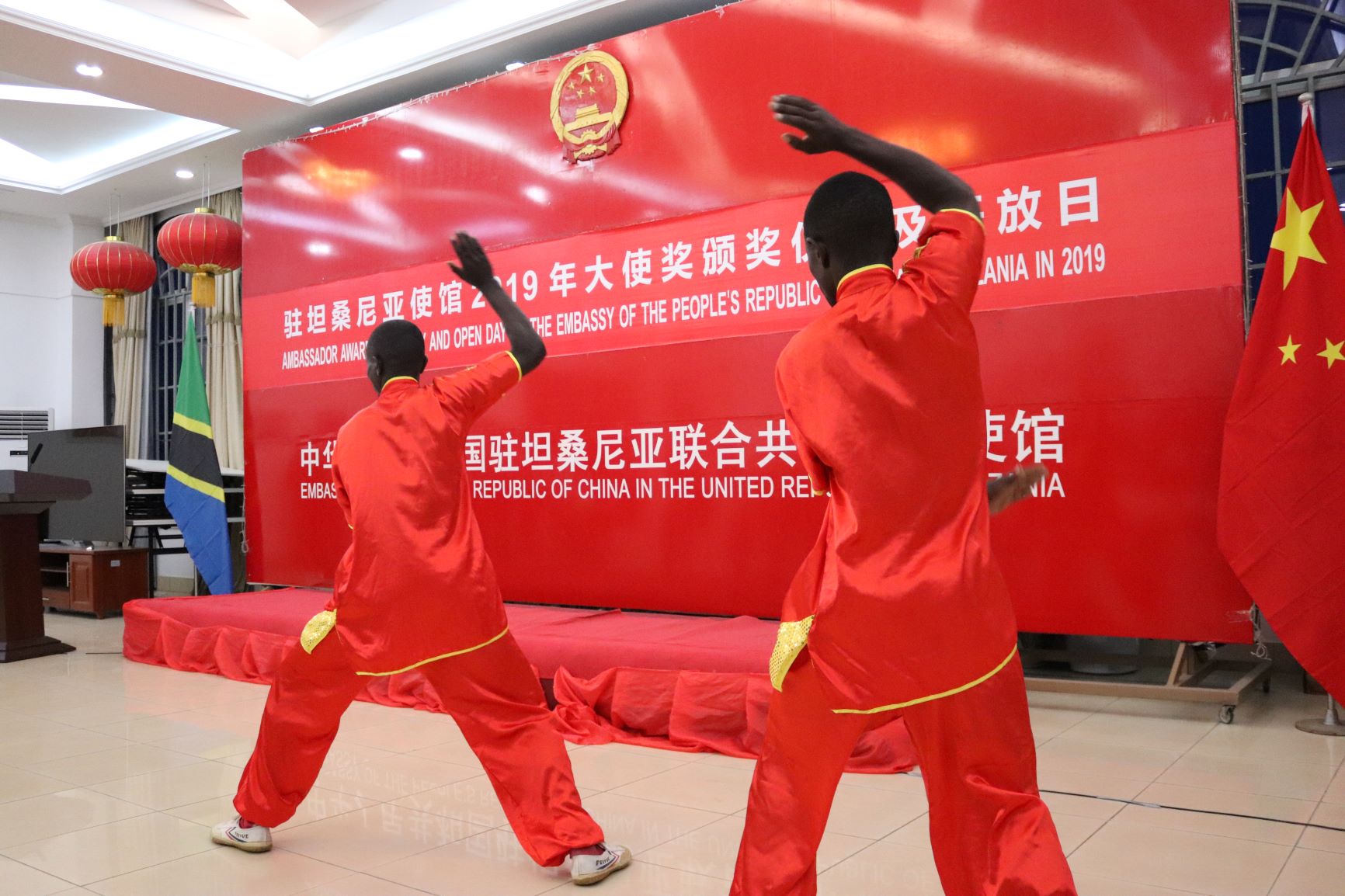 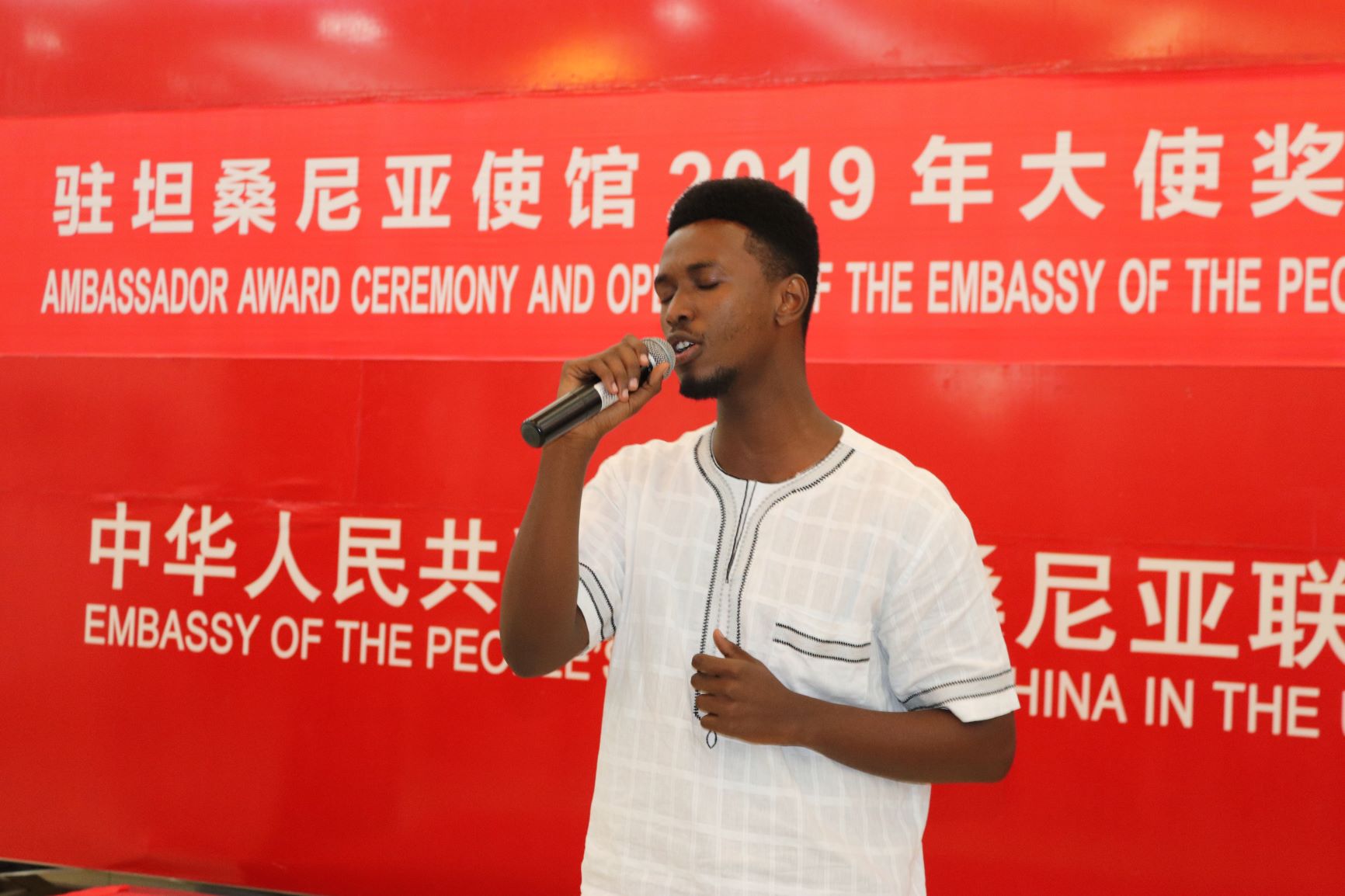 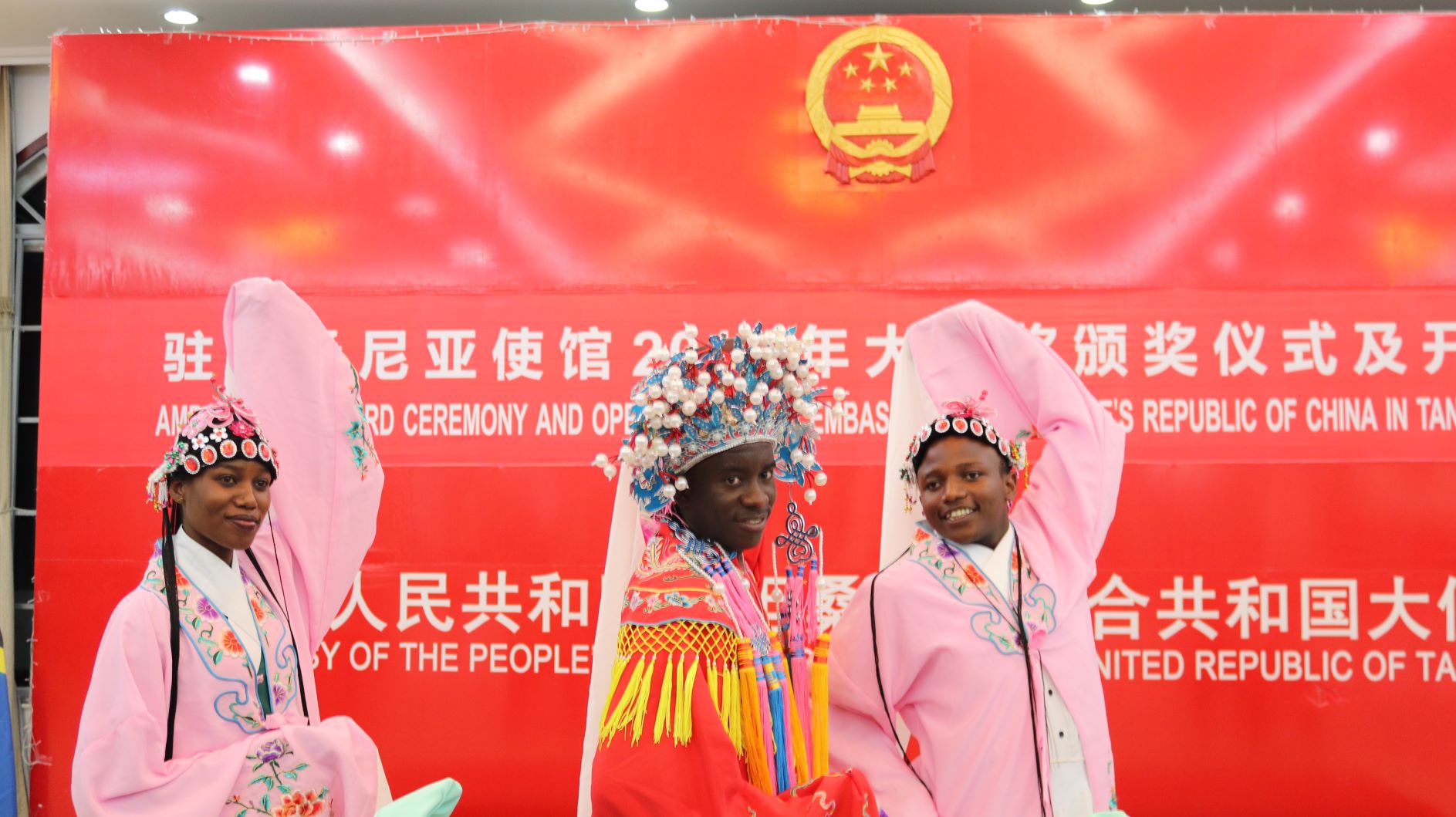 Peking Opera ,"An Ode to the Pear Blossom" 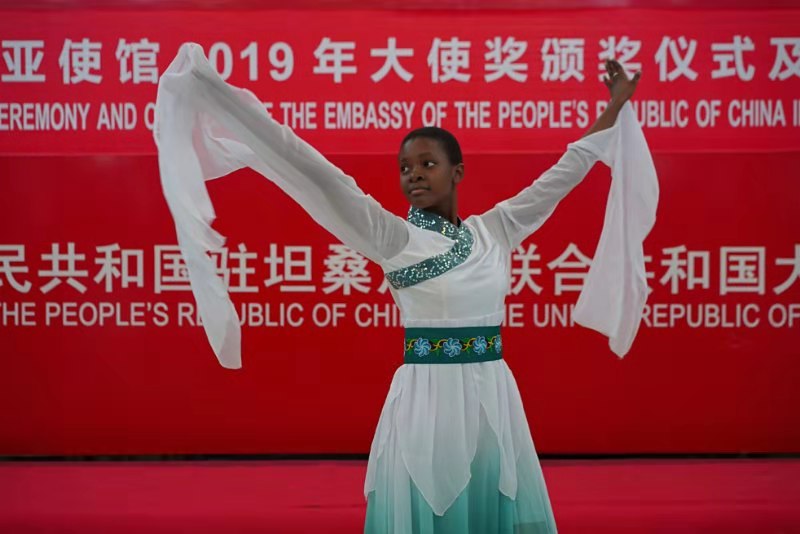 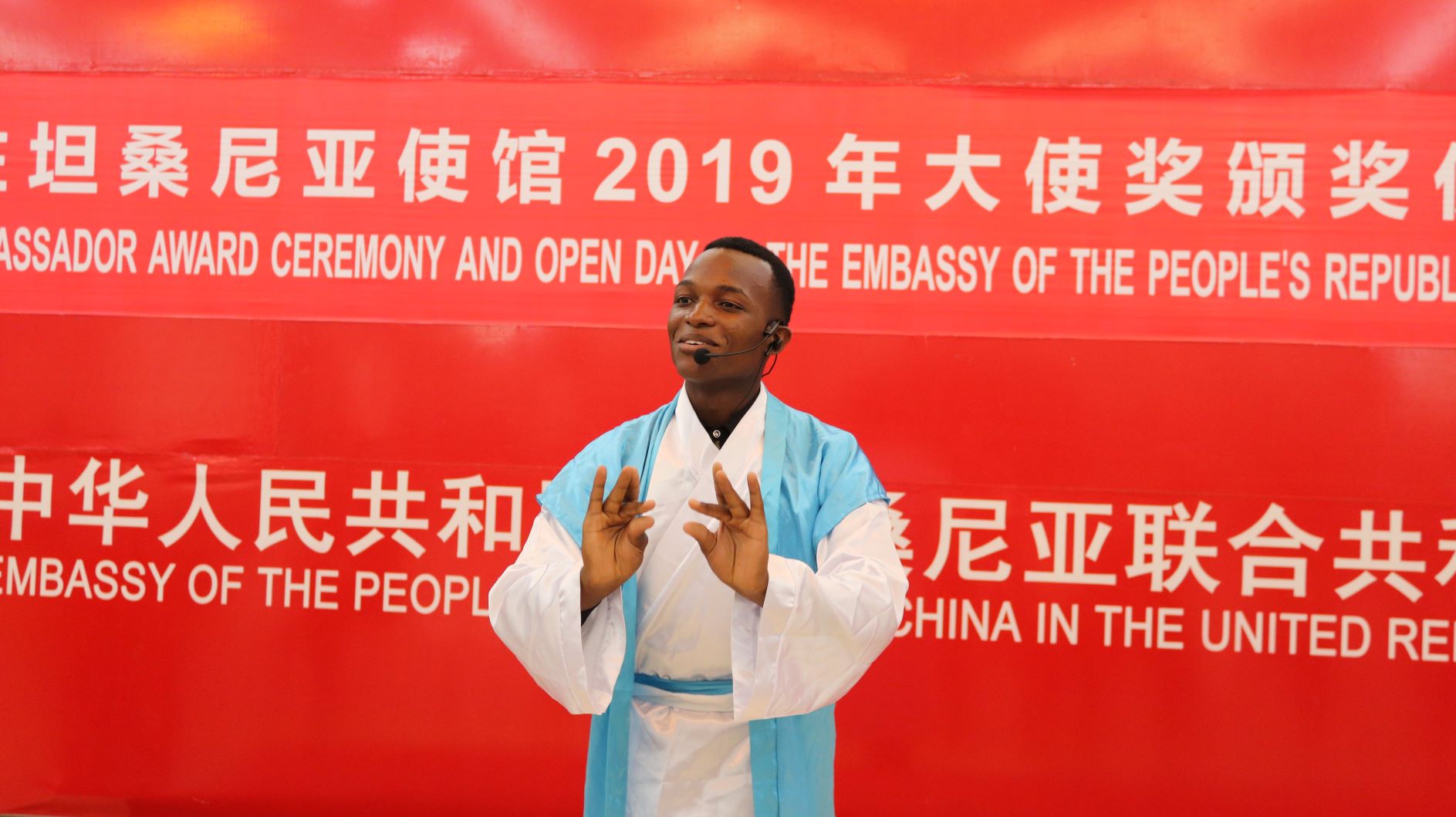 Huangmei Opera,"Dragon returning to the sea and bird into the forest" 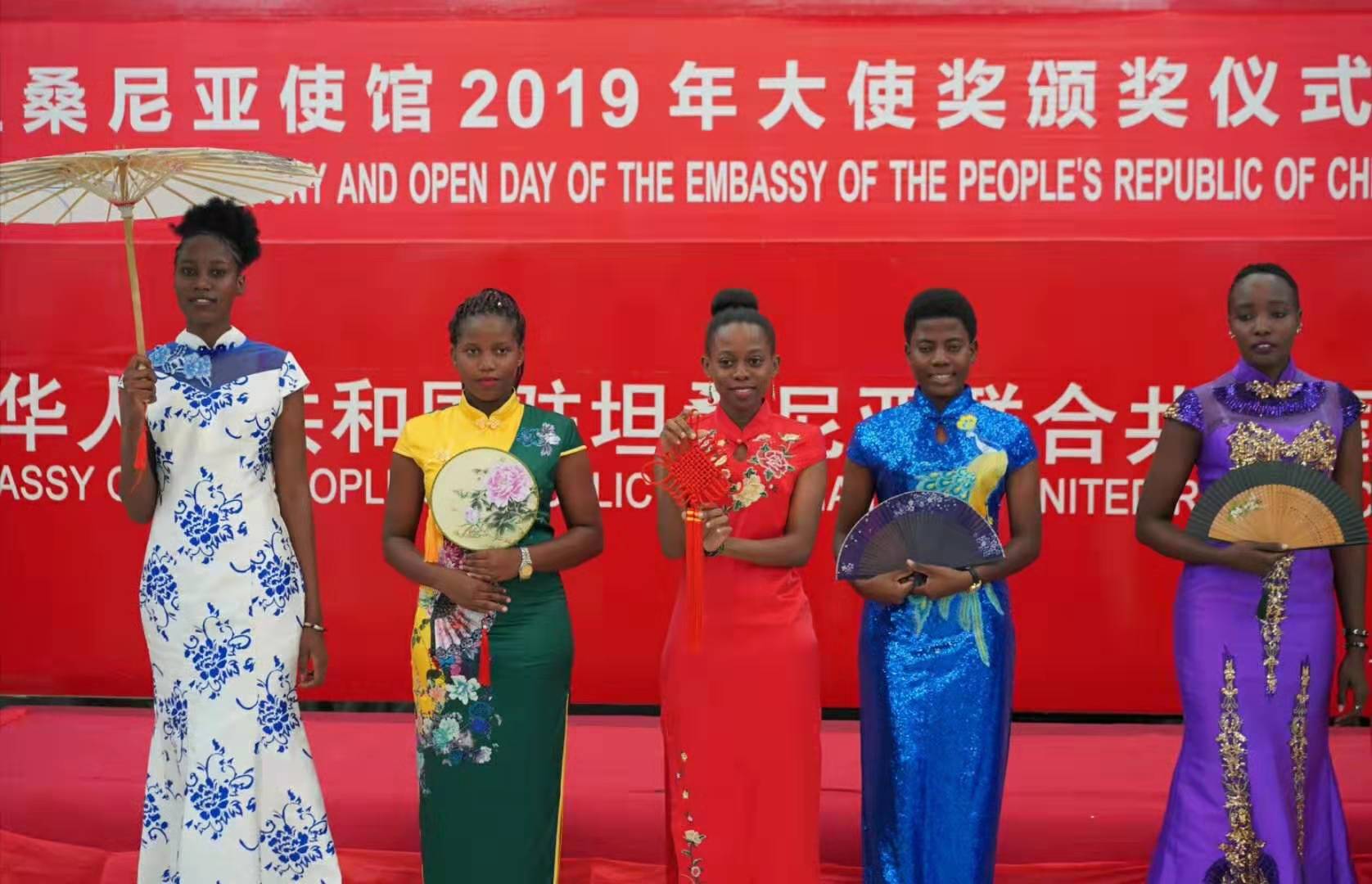